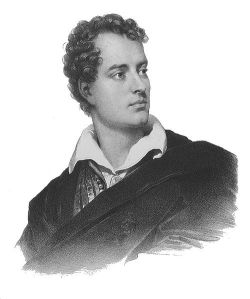 It’s been more than two weeks since I posted a poem from the Reading the Romantics project.  Alas, I missed the entire two weeks devoted to the poetry of Samuel Taylor Coleridge.  We are reading George Gordon (Lord Byron) this week.  Byron (1788 – 1824) was an English poet.  According to Wikipedia, his life was full of “aristocratic excesses, huge debts, numerous love affairs, and self-imposed exile“.  Sounds like he was having too much fun.  One of his children, Ada King (Countess of Lovelace), is considered the world’s first programmer.  How lucky for him.  After all that debauchery and his contributions to the poetic form, he is also mentioned whenever his daughter’s achievements are lauded!

This week’s poem is  So, we’ll go no more a roving. It speaks of the fatigue of age wearing out the exuberance of youth. The poem has been used by songwriters such as Leonard Cohen and Joan Baez. It has also been featured in Ray Bradbury’s novel The Martian Chronicles and John Wyndham’s The Day of the Triffids. Enjoy! And Happy Thanksgiving to the my readers in the US.

So We’ll Go No More a Roving

So, we’ll go no more a roving
So late into the night,
Though the heart be still as loving,
And the moon be still as bright.

For the sword outwears its sheath,
And the soul wears out the breast,
And the heart must pause to breathe,
And love itself have rest.

Though the night was made for loving,
And the day returns too soon,
Yet we’ll go no more a roving
By the light of the moon.