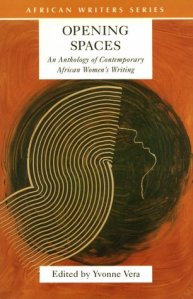 Yvonne Vera, in her introduction to Opening Spaces: An Anthology of Contemporary African Women’s Writing (1999) , states:

“Africa is as diverse as its womanhood as it is in its disillusionment. Our reference to an African womanhood is a mere trope, a way of ordering, much too limiting.  Yet the purpose of an anthology is also to create unities, to motivate strengths, and offer a signature. In this collection the aim is to create a circle…joined by land, by the evidence of the eyes, by current struggles, by a hunger for escape”.

Opening spaces is what the women in these fifteen stories do as they forge new values and new modes of relating to traditional systems and expectations.  Some desperately need to escape confinement, whether physical, mental or emotional. Exerting their agency in opening these spaces, some will succeed, others will barely escape with their lives but all reveal a need for solidarity and an acceptance of just who they are.  Nothing more and nothing less.

Stories in the anthology include:

…one should be able to do other things with legs was well as have them because they can support hips that make babies.

These women are certainly spirited and some readily employ anger and shocking tactics to demand their due and space:

Anna Dao’s The Perfect Wife upends the usual portrayal of women in polygamy when co-wives forge an enduring, loving relationship when forced to confront life alone when their husband dies just as he returns from fighting in World War I.

I was really by touched by The Home-Coming, Milly Jafta’s gentle story. A mother retires to her  home after a forty-year period working as a domestic help and finds comfort in her daughter.

“In her calm voice she repeated the question, asking whether she was walking too fast for me.  Oh dear God, what kindness.  Someone was actually asking me whether I could keep up.  Not telling me to walk faster, to have no males in my room, to get up earlier, to pay more attention, to wash the dog… I was overcome.  Tears filled my eyes.  My throat tightened, but my spirit soared.  The stranger, my daughter, took the case from her head and put it on the ground next to her… “

Some stories are conventional while others are experimental.  All look at women’s lives, but also cover a range of social, economic, familial and societal issues.  The writers are from East, West and Southern African with one from North Africa. I would have like to see stories from North Africa.  Also, it appears that there are three translated stories (out of fifteen) though it is hard to tell because translators, regrettably, are not mentioned.  All my issues aside, the anthology is a truly enjoyable book and I’m happy to have discovered it again.

Opening Spaces itself opened a space from which African Love Stories emerged.  Credit is due to Nana Ayebia Clarke, formerly of Heinemann, and now of Ayebia Publishing for her work on these two anthologies.

The rest of the stories in anthology are: