It’s somewhat of a custom to start the New Year here at Kinna Reads with a poem.

I’d thought of posting Sylvia Plath’s ‘New Year on Dartmoor’  but as beautiful as the poem is, it’s a bit of a downer. A tad anti-resolution ish.  I must, at least, try to see the new year as a chance for new beginnings are all that blah.  So I settled on ‘New Year’s Day’.  Settling is really not the right sentiment, because as you’ll see and read, there are elements of realism in this haiku.

New Year’s Day–
everything is in blossom!
I feel about average.

– by Kobayashi Issa and translated from the Japanese by Richard Haas

Happy New Year everyone! and here’s is hoping that the year at Kinna Reads is more than average, way more. 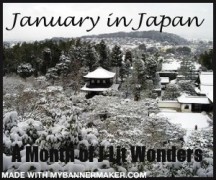 Later in the week or month, I’ll outline my bookish plans for the year.  I have a number of interesting reading plans and challenges coming up.  I hope you’ll join me for one or two of those.

I begin 2014 with January in Japan, a reading of Japanese literature event hosted by Tony Malone. I will contribute a J-Lit Giants post on Fumiko Enchi.  I’m also reading Yoko Ogawa’s The Diving Pool, which is one of two readalongs that Tony is hosting.  The other is Haruki Murakami’s Norwegian Wood, which is scheduled for the second half of the month. It’s not too late to participate in January in Japan so do consider a reading of something J-Lit.

My other plan for the month is to review a number of books that I read in 2013; some even require a reread.

Kobayashi Issa (1873 – 1828) is famous for his haiku.  He was also a lay Buddhist priest. Issa is one of four “Haiku Masters” – the other three are Basho, Buson and Shiki. I know enough about world poetry to have heard of Basho and read a few of his poems.  Generally though, I’ve tended to avoid reading haiku.  Mostly I think, shoot, where the rest of the poem?

Celestine of Reading Pleasure  has been writing a lot of haiku and since I love to read her blog, lately I’m reading more of the form. Her latest is:

Bless her, but my heart was definitely not silent when schools re-opened and my 7 seven year old started school again.

Paradoxically, I find that it takes patience to enjoy haiku. I’m learning; here’ s to more haiku in 2014.

I leave you with another Issa poem: