(This is Jerome Kuseh’s fifth review for Kinna Reads; his previous reviews can be found here. Jerome Kuseh blogs about politics at jeromekuseh.com, about ethnicity and identity at ukweliwa.org and about everything else atreadjerome.blogspot.com”)

“To be a black male is to be always at war, and no flight to the county can save us, because even there we are met by the assumption of violence, by the specter of who we might turn on next.” (p.192) 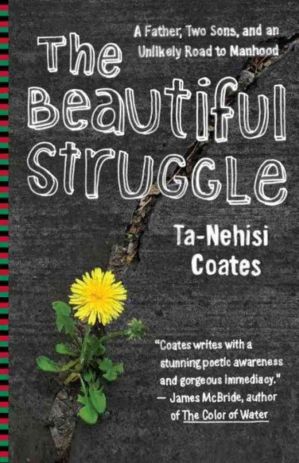 That is the world in which Ta-Nehisi grows up. In Tioga in West Baltimore in the 70s and 80s, a black boy had to earn his respect by not backing down from a fight. By not being “soft”. You could also not walk without your crew to stand by you in case some boys wanted to jump you.

In this environment which made men out of boys too young and corpses out of men not ready, Ta-Nehisi is guided by his father – a revolutionary Vietnam vet and former Black Panther who runs a publishing press for arcane and out of print black literature. His dad had seven children with four women by the time he is 29. Ta-Nehisi and his brother, Menelik, who is eight years younger, are the children of the fourth mom, Cheryl Waters.

The memoir focuses on Ta-Nehisi’s father, Paul Coates, his brother Bill and himself. It is a coming-of-age story for the three of them.

Paul’s father (Ta-Nehisi’s grandfather) was an alcoholic who sired so many children with so many different women that he lost count. Paul goes from a leader of the Black Panthers in Baltimore to being disillusioned when the Panthers turned on each other. He tries to raise his children to be “conscious”, feeding their minds with black literature, banning religion, meat (erratically), Christmas and 4th of July celebrations. He beats and talks them into taking their studies seriously so that they can make it to the Mecca (Howard University). He has one supreme rule – you leave his house when you turn 18.

Big Bill is Ta-Nehisi’s older brother from another mother. He thrives in the environment of West Baltimore. He rolls with a crew. He starts a rap group. He gets the jennys (girls). He has a gun. He surprisingly makes it into the Mecca and becomes a weed dealer. One day he has an experience on campus that changes his whole worldview.

Ta-Nehisi is a goofy kid. Tall and big yet unable to fight. He reads everything he can get his hands on and that makes his parents proud. But at school, he is indisciplined, he sleeps in class, he confronts teachers and his grades are terrible. Against all odds he makes it to the Mecca and the book ends as that journey is about to begin.

Playing in the background in this story is hip hop. It serves as a barometer of the times. It measures the hood and portrays it. The music evolves with the hood from the fun origins of hip hop that had everyone looking for gold chains and great kicks to the conscious era of KRS-One and Public Enemy that had people getting rid of perms, wearing ankhs, chanting revolutionary slogans and learning African culture. By the time the gangster phase set in, Ta-Nehisi had found new inspiration in his djembe traditional drum and described the gangster movement as a “death cult….hard where it mattered least — attacking whole genders, claiming to run the street, and then fleeing in the wake of the Beast.”

The many references to Akan names, traditions, Twi and Nkrumah certainly made me crack a few smiles as a Ghanaian. The authenticity of the book is reflected in the use of West Baltimore (or is it black) slang and the honesty about Ta-Nehisi’s failings and his relationship with his father.

As a dedicated reader of Ta-Nehisi’s column in the Atlantic and a one-time defender of his intellect, I was really happy to read about the upbringing that makes his writing so compelling. And I am grateful to my friend who got me this book as a gift.