Poem #29: Last of his Tribe by Oodgeroo Noonuccal 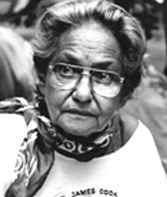 Whispering Gums runs  a weekly feature  titled “Monday musings on Australian literature”. The second installment of this series focused on the works of Indigenous writers including the poet and activist Oodgeroo Noonuccal (1920 – 1993). She was also a campaigner for the rights of Indigenous peoples.  Loss, especially cultural loss, is a frequent theme in her poetry.  This week’s poem is a tribute to Willie Mackenzie who was a “full-blood Aboriginal and the last surviving member of the Darwarbada people of the Caboolture district. He died in 1968, age unknown but probably in the eighties.”

Last of his Tribe

Change is the law. The new must oust the old.
I look at you and am back in the long ago,
Old pinaroo lonely and lost here
Last of your clan.
Left only with your memories, you sit
And think of the gay throng, the happy people,
The voices and the laughter
All gone, all gone,
And you remain alone.

I asked and you let me hear
The soft vowelly tongue to be heard now
No more for ever. For me
You enact old scenes, old ways, you who have used
Boomerang and spear.
You singer of ancient tribal songs,
You leader once in the corroboree,
You twice in fierce tribal fights
With wild enemy blacks from over the river,
All gone, all gone. And I feel
The sudden sting of tears, Willie Mackenzie
In the Salvation Army Home.
Displaced person in your own country,
Lonely in teeming city crowds,
Last of your tribe.