Several reviews of Merce Rodoreda’s Death in Spring favorably compare the novel to Shirley Jackson’s The Lottery. This was enough to send me in search of the short story, as Rodoreda’s novel is one of the most startling books that I’ve read.

The Lottery takes place on a sunny day in June, in a small New England village in northeastern United States.  The villagers gather in the square for the annual drawing.  Children talk of school, the men talk of “planting and rain, tractors and taxes” and the women exchange gossip and small talk.  The first ominous sign of trouble is the gathering of stones by a group of boys: 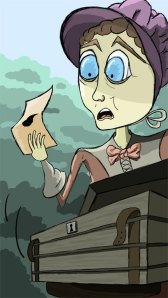 Those assembled separate into groups of families amidst talk that other towns have abandoned the annual lottery tradition. The lottery is conducted; each head of a household (typically male) draws a piece of paper from a wooden box. The unlucky man, in this case, Mr. Hutchinson, draws a piece of paper with a black spot on it, and he then proceeds to a second draw that will determine which member of his family will be stoned to death.  It’s his wife, Mrs Hutchinson, will be sacrificed this time. She protests but her cries fall on deaf ears:

“It isn’t fair, it isn’t right,” Mrs. Hutchinson screamed, and then they were upon her.

The Lottery portrays a society’s blind adherence to an age-old tradition that over time has lost some of its accompanying rituals and all its meaning. Jackson urges us to question authority, especially when tradition is used to justify practices that are oppressive. The story was first published in The New Yorker in 1948 and it caused such an uproar; lots of readers canceled their subscriptions and the South African government banned the story. Its iconic and canonical status (so please forgive the spoilers :)) was secured by the events surrounding the publication.  It is considered one of the best American short stories of all time.

So, how does it compare to Death in Spring?  Well, there is no character development in The Lottery; the event itself is the character, let’s say.  And obviously, it is meant to shock.  It felt a bit staged to me.  The horror in Death in Spring felt natural, bigger and scarier, and not because it is a novel but, because of how Rodoreda chose to tell the story.  So, I still think that Death in Spring has no equivalent in literature written in English.

Nonetheless, The Lottery is an impressive story in its own right.

The story can be read here.