(This review of short story #4, is my fifth post on African Roar 2011.  I will be blogging about all the fourteen short stories in the anthology.  My introductory post is here.  Please click on the “African Roar 2011″ tag at the top of the article to see all related posts on this anthology.)
——— 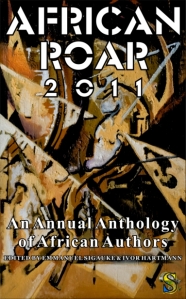 Grace Chirima is walking to the Harrow-on-the-Hill train station when we first meet her in Longing for Home. Her “black boots crunched on the frozen ground”.  She is “breathing clouds of steam”.  She’s having a miserable time of it and starts reminiscing about her home in Zimbabwe.  Her family sent her to England to further her studies, funded by money that her grandfather saved specifically for Grace’s education.

Unfortunately, by the end of her first year, with economic conditions worsening in Zimbabwe, she is forced to quit school and work to support her family.  She doesn’t seem to have many friends or any social life, for that matter.  She lives with several British girls who don’t seem to care for her.  But the male roommate, Greg, is kind and shows much concern for Grace.

Upon his advice, Grace applies for a job as a receptionist at his workplace. One morning, with Grace and Greg en route to her interview for the job, tragedy strikes. The tragedy is notable because a specific date is mentioned.  But bad things happen to good people so I shall not dwell nor reveal the nature of this tragedy.  However, I felt that the event was a deus ex machina device to resolve the story neatly.  But let me set that aside.  Because even assuming that the event is plausible, the ending of the story came a bit too suddenly.

The story of the immigrant facing difficult times is well-known in literature. But I still felt drawn to Grace’s story and I was keen to know how Grace, this Grace, felt about her experience.  How she was navigating her new reality.  How exactly she was coping?  And could she see the growing affection in Greg, in spite of what she was going through? In other words, the story was short on rendering Grace’s inner turmoil.

The action of the story takes place in Zimbabwe as well as England.  There are lots of passages about her family and the life they lived prior to the economic decline.  Most were not necessary.  One night, Grace gets a phone call from her mother and she is told about her grandfather’s illness, the harrowing conditions in Zimbabwe and that the family can no longer afford to send her money.  In fact, she will have to support them on whatever earnings she makes in England.

“Grace, your Sekuru has given us all a good life.  Try to see if you can do something to look after him now”.

The entire phone conversation is powerful and very well-written.  It provides all the context and all the information needed to understand and assess the family’s dire circumstances in England.  It makes all the other passages about Zimbabwe redundant.  And I wish the author had used the other space to focus on Grace and her life in England.

I can hear my mother telling me that story is not what the author wrote. I know.  Hajira Amla writes really well and that’s why I wanted to read what she could do with a more complete Grace.

(African Roar 2011 is currently available at Amazon.com as a kindle e-book.)