I should go and open my post office box more often. ( It’s really my mother’s box.  She says she’s operating it just for my books!) .  Look what arrived in my mail: 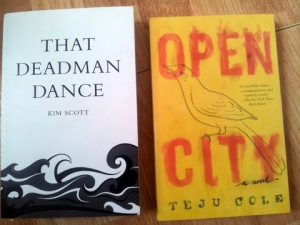 The excitement is killing me.  I’ve wanted to read Kim Scott’s That Deadman Dance since it won the 2011 Miles Franklin Award, Australia’s most prestigious award.  Lisa of ANZ Litlovers Litblog sent it to me all the way from Australia.  Of course, Lisa, whose coverage of Australian literature has no peers, is partly to blame for my obsession with That Deadman Dance!  She talked about it a lot (she couldn’t help it; the book was on most of Australia’s award lists) and she eventually crowned it the  ANZ LitLovers Australian Book of the Year.  Kim Scott is one of Australia’s finest writers and the few Aussie books that I’ve read have been marvelous indeed, so I’m looking forward to reading  this one about the early contact between Indigenous Australians and Europeans.  Thanks Lisa!

I won Teju Cole’s Open City in a giveaway at Africa Book Club.  Another book that I’m excited to read.  It follows the ramblings of Julius, a German-Nigerian immigrant doctor as he wanders around New York City.  A story that appears to be missing a plot.  My kind of book.  Thanks to the ABC.

I have this firm belief that I have the worst luck in lotteries, raffles, etc.  I should give this belief up.  Because frankly, I’ve been winning my share of books since I started blogging and entering giveaways.  Fingers crossed, my luck is turning, touch wood and all.  I won Paolo Bagigalupi’s Pump Six and Other Stories in the February 18, 2012 edition of the Literary Blog Hop over at The Book Stop.  Paolo Bagigalupi is an award-winning American science fiction author whose name I’ve been encountering on sci-fi blogs for a while now.  Ten stories are collected in this book and should serve as an excellent introduction to this author’s work.   A hearty thank you to CurlyGeek04.

Rarely do I get offered advance review copies of books that I actually want to read.  I loved Hilary Mantel’s Wolf  Hall. I mean really loved it.  So imagine my delight when I was offered the ARC of Bring Up the Bodies, which is the sequel to Wolf Hall.  I get to commune with Cromwell and Mantel’s delightful use of the “he”pronoun.  My final thanks goes to Christine at Henry Holt.

Have you read any of these books?  What books are you looking forward to reading?