Additions to the Stack from The Book Trust 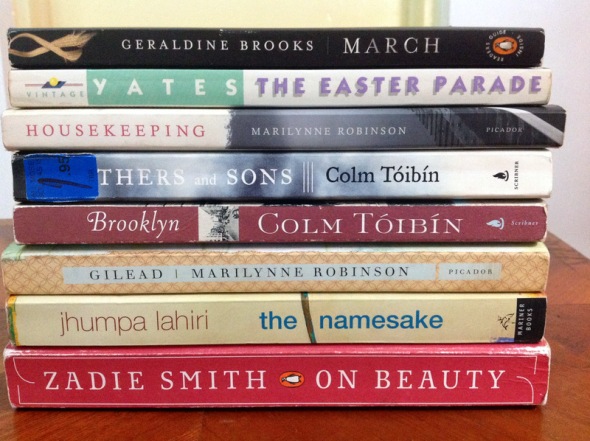 I wanted to publish a blog with the above picture in an enormous size — just the picture and nothing else, so you could all stare at the books since I’ve been doing that for about a week now. It’s not as if one doesn’t have enough books that one hasn’t read but the feels from a recent acquisition books is just … well, I’m sure there’s a Japanese word for such an emotion!

The Book Trust (in Ghana) runs several programs including a prize scheme, workshop and their flagship book selling program. (Apologies, their website is down so can’t link). The trust imports used books from, I’m guessing, mainly America and sells them to the Ghanaian public.  Currently, novels and children books are Ghc3 (roughly $0.85) each. Like all used bookstores, it;s deliberately disorganized so a visit there demands at least one hour to uncover gems – a process that I cherish.

You won’t find much translated fiction nor any African literature – that’s not why one goes there. The store stock quite a lot of American literature, ‘chick lit’ ( we need a better term), popular literature especially those found on the New York Times bestseller lists. Anyway, I’ve never been disappointed with what’s on offer at The Book Trust. My last trip was soooo good. Enough, let’s talk about the books:

Housekeeping and Gilead, both by Marilynne Robinson – I’ve wanted to read the multi award-winning Robinson from the very first that I heard of her many years ago.  Then in 2011, I got her third novel, Home. But then I got it into my head that I had to read her novels in order of publication so I shelved Home and waited patiently for Housekeeping to appear. A gnawing wait it seemed at times. You, my peer book lovers, can imagine the ecstasy at finding not just Housekeeping, but also Gilead, at The Book Trust. May all books find a loving home! Marilynnie Robinson is a Christian – a Congregationalist – and religions themes, the church, pastors, the ideas of John Calvin are frequent themes in her work. Her most recent book is Lila (2014), described as a prequel to Gilead. 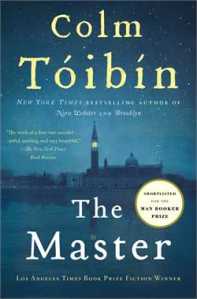 Brooklyn and Mothers and Sons, both by Colm Tóibín –  I hardly talk about my pre-blogging favorite reads on Kinna Reads and I should.  Tóibín’s fictional account of Henry James’ life in the late 19th Century, The Master (2004), is one of my favorite books. It’s profound, sublime and deeply satisfying – just the thought of it meets all my book needs in that moment. There are books like that, right? It wouldn’t come as a surprise that I’ve wanted to read more Tóibín, a want easily satisfied since the writer has published ten books of fiction, short story collections included!

March by Geraldine Brooks – Winner of the 2006 Pulizter Prize, it is a retelling, by the absent father, of Louisa May Alcott’s Little Women. The book  has been described as a “dreadfully respectable fan fiction”!  Would a good reading of this book require a re-reading of Little Women? Where is the time?

The Easter Parade by Richard Yates – The novels of this American novelist are a constant on my wishlist. Richard Yates (1926 – 1992) wasn’t popular during the time of my earnest reading of American literature. Thankfully,  he’s back on all the lists. The Easter Parade — which looks at the tragic lives of the Grimes Sisters — along with Revolutionary Road are considered his best books.

The Namesake by Jhumpa Lahiri – So a thing happened when in 1999 Jhumpa Lahiri published Interpreter of Maladies, a short story collection centered on the lives of Indians and Indian Americans in America. The Namesake is her first novel (folks always make such a fuss over first novels, but I’m not here using first as in their first; Lahiri, by her collection of short stories, is a very fine writer indeed). The book is about a Bengali family, the Gangulis, and their struggles to “become Americans even as theu pine for home”. They name their first son, Gogol, in honor of the Russian writer Nikolai Gogol. I want to read this now.

On Beauty by Zadie Smith – Don’t tell the literary establishment — the insiders — but I never finished Zadie Smith’s White Teeth. And I doubt I’ll ever go back to it. I have no explanations. This story of  mixed-race British family in America will be my second attempt at reading Smith.

I think I did good at The Book Trust!

(For those in Accra: The Book Trust store is located opposite the University of Professional Studies (former IPS) in Madina and it’s open M-F, normal working hours.)

Any recent additions to your stack that you care share? Have you read any of the eight above?