After a long absence, I’m delighted with this return to book reviewing!

Terror and dread, in my reading life, are measured on a scale of the mildly unsettling to the Pedro Paramo, Juan Rulfo’s masterpiece about a man who goes in search of his father but finds only ruin and ghosts. Andrés Barba’s Such Small Hands is comfortable past the scale’s midpoint.

The story begins with trauma:

Her father died instantly. Her mother in the hospital.

“Your father died instantly, your mother is in a coma” were the exact words, the first ones Marina heard. You could touch those words, rest your hand on each sinuous curve: expectant, incomprehensible words.” 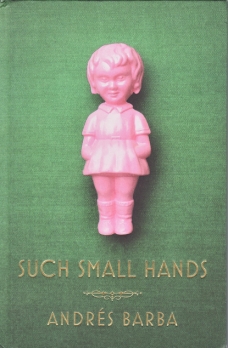 Seven-year old Marina survives an accident which claimed the lives of both her parents and is later placed in a girls’ orphanage. The girls are happy and comfortable but are deeply unsettled by Marina’s arrival. On her part, Marina casts a lonely outsider figure who appears to struggle with her grief.  Or rather, she remains uncommunicative regarding the loss of her parents.  During the day the girls bully her, but at night she becomes the ringleader in a game of own making in which the girls take turns pretending to be dolls.  Each passing page heightens the dread and darkening – but too many references to “dark” and “darkness”annoyed me – till the terrible end.

Such Small Hands is an exquisite novella. Barba’s handily inhabits the consciousness of Marina and the girls.  I’m not sure if “handily inhabits” is the description I’m going for.  But by that I mean Barba doesn’t try to explain childhood to us.  Rather, readers are treated to the forgotten feel of childhood, particularly the unstable, uncontrolled emotional part that’s always in flux. Everything Marina does enchants the girls; they love her and hate her at the same time. They are unable to comprehend the danger in their fantastic escalating fascination for Marina, for her words and actions, for her body, for her life.

The horror of Such Small Hands is ingeniously channelled through shifts in the narrative, alternating between Marina’s third person point of view to a Greek chorus-style collective ‘we” that presents the girls’ point of view. It’s marvellous – Greek choruses can be so ominous.  The story in Such Small Hands is ambiguous, it’s loving, it’s terrifying, it’s hysterical, it moves on unconscious desires and yet we understand and know it perfectly as childhood.  As Edmund White says in the book’s afterword, “Barba has returned us to the nightmare of childhood”.  He’s achieved this with a prose that is beautiful, sparse but intense and vivid.  Such great storytelling of a haunting and disquieting story, masterfully translated by Lisa Dillman. Though a realist piece, Such Small Hands evoked the magical-realist Pedro Paramo and that’s a really fab thing.

There’s always the obligatory comment on Saramago’s writing style when folks review his books. That he deploys long rambling sentences with very little punctuation – only periods and commas, new paragraphs, no quotation marks – and that sentences can be page-length etc. etc. This obligation bores me (I know I’ve done the same here). The lack of punctuation is hardly the most notable aspect of his writing, and by the time we get to Cain, Saramago’s last novel of a 31-book body of work, it’s not even innovative. Quite a growing number of writers use the same style and readers should be getting used to this by now. Page-length sentences are not health risks; a Saramago book is not a pack of cigarettes. 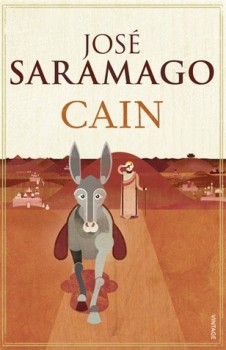 When a writer has an extensive bibliography (for Saramago: 31 books, most translated from the original Spanish), choosing a kickoff point to begin reading their oeuvre can be vexing for me. Should I start at the beginning, or perhaps with the most popular book, the most reviewed, a novella, with the short stories, what? I’m peculiar and my reader problems have lives of their own. In case, you are like me, don’t fret. I’m here with the PSA: don’t start your introduction to Saramago with Cain, his last book. Start with something on my list of Saramago’s Best Five. I think there are writers whose later books benefit from having come after earlier works. Almost like there is a hereditary line, an inherited understanding. So when I’m reading Ngugi’s Wizard of the Crow (LOVE), I need to appreciate that it comes from the line of Weep Not, Child; The River Between; A Grain of Wheat and Matigari. Same with Morrison’s God Help the Child – its forebears are Song of Solomon, Beloved, The Bluest Eye, Sula etc. Like I said, “reader problems”.

The main outcomes of the story in the earlier The Gospel According to Jesus Christ do not deviate significantly from the biblical version but there is more humanity- flaws, doubts, passions – in Saramago’s fictional account of Jesus, which takes liberties in filling in the many parts of Jesus’ life left unremarked in the Bible. Cain, though different, retains Saramago’s primary concern with humanity even when dabbling in texts concerned with gods.

Cain, having killed Abel, when confronted by God argues that God shares culpability in the murder:

“you are the one who is really to blame, I would have given my life for him if you had not destroyed mine, It was a question of putting you to the test, But why put to the test the very thing you yourself created, Because I am the sovereign lord of all things, And of all beings you will say, but not of me and my freedom, What, the freedom to kill, Just as you had the freedom to stop me killing abel.”

Cain’s argument is that God could have prevented the murder of Abel if God had also accepted Cain’s sacrifice. God accepts his “portion of blame” and punishes Cain to wander the Earth but grants Cain indestructible status. In exchange, God asks Cain to repay his benevolence by not doing harm to anyone else. Saramago’s Cain is able to time-travel among the keystone stories of Genesis – Sodom and Gomorrah, Abraham and Isaac, the Tower of Babel, Noah and the Ark – but Saramago’s version of these stories incorporate trajectories vastly different from the original. At its core is Cain’s growing anger at God’s allowances with humanity and the atrocities that God permits to happen. Cain’s uses his knowledge of God’s penchant for issuing orders and then disappearing for ages, content that his divine status means compliance or death, to a devastating conclusion.

It’s a Saramago book, so in the midst of chaos there is comedy, a lot of profound questions of morality, of our humanity and for me, a healthy dose of irreverence and the issue of God’s accountability. If José Saramago’s work, if his writing had to end with Cain, it’s as good an end as any.