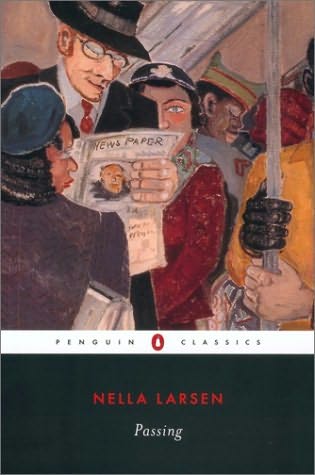 Passing, written by Nella Larsen in 1929 during the Harlem Renaissance, is a masterpiece. Its main plot centers on two light-skinned black women, Irene Redfield and her childhood friend Clare Kendry. Both women can “pass” for white. Irene, married to a successful African-American doctor, passes only when it is convenient, when she needs to enjoy certain amenities of the society that should be afforded to all races but are denied black people. Her passing is a sort of “don’t ask, don’t tell policy”. Irene is shocked to discover, at a chance meeting with Clare, that Clare not only passes, but has completely adopted a white identity, has married a successful white businessman and has one daughter. This piques Irene interests, and ignoring her inner instincts to stay away from Clare, she decides to rekindle her childhood friendship.

She wished to find out about this hazardous business of “passing,” this breaking away from all that was familiar and friendly to take one’s chances in another environment, not entirely strange, perhaps, but certainly not entirely friendly.

This rest of the story deals with Clare’s “avowed yearning for her own people”, the risks to the discovery of her black heritage as she frequents the Redfield household and the strained and conflicted relationship between the two women. There is also the threat to the stability of Irene’s marriage due to her husband’s longstanding desire to quit America and settle in Brazil, tired as he is with the treatment of black people. The figure of Clare’s husband, a self-professed racist, also looms large in the story. Clare and Irene’s lives are quite literally poised on the edge of a precipice, dictated by both their personal and their families’ reactions to the social realities of post-World War I America.

The book’s plot and interrogation of racial identity makes for an amazing story. Yet Larsen submerges within the main plot the more dangerous sub-plot of women’s sexual identity and desires. This speaks directly to the genius of Nella Larsen. And she manages to do this by setting up Irene as an unreliable and untrustworthy narrator. At the onset, with a letter from Clare which Irene conceals the entire contents of,  it is clear that Irene filters out her feelings and events.

Both women are sexually repressed; Irene and her husband sleep in separate bedrooms, sex seems to be an issue between them. Clare’s husband is away on business most of the time. Irene becomes increasingly besotted with Clare at each interaction that they have. She remarks often on Clare’s beauty and whatever resolve she makes to stand up to Clare’s selfish ways disintegrates as soon as Clare enters the picture. Most telling, Irene concocts an imagined relationship between her husband and Clare to cement her portrayal of and to fight her feelings for Clare. Irene never sees nor admits to having feelings for Clare. Yet, all is plain for the reader to see even though she is remains clueless about the impact of some of her statements. By the end of the novel, Larsen resolves both issues – Clare’s passing and Irene’s feelings for Clare – quite neatly and powerfully.

Passing succeeds at investigating the links between race, gender, sex and class and their role in the formation of personal identity. But it is also an amazingly well-written and thoroughly enjoyable book. Irene Redfield and Clare Kendry are one of my favorite couples in English literature; although their relationship is atypical, filled as it is with so much conflict and tension. Larsen’s writing is provocative, understated, often beautiful and at all times powerful. This book should be read more widely, not only because it was written during the Harlem Renaissance but also because it is one of the best books ever written. A must, must read.