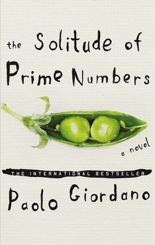 So I run out and got The Solitude of Prime Numbers after adding it to my wishlist.  I remarked to two friends (they have both read the book) that I would be reading the book soon.   The two have them have strong , I mean strong, but differing opinions about the book.  One absolutely loved it while the other hated it.  So I wondered, if based on the reviews on blogs and newspapers, I could divine, before reading the book, whether I would love it or hate it.

Thomas Kuehn on BookPage: Giordano deftly creates a sense of loneliness and loss through the use of simple, beautiful language and powerful imagery. The brevity of this novel does not diminish its power, while the maturity of the prose and the courage of the storytelling belie the fact that this is Giordano’s first novel.

Bibiophile by the Sea: MY THOUGHTS — I loved this book… The story is told in short, alternating chapters, and it drew me in from the very first page. The characters are damaged and sympathetic. It is a beautiful story which shows just how a traumatic childhood can scar us for life. It’s a story of missed opportunities, and one that I will not easily forget. The ending surprised me, and I look forward to more books by this talented author. READ THIS BOOK! – ( 5/5 stars )

The Guardian: Part of the success of the book comes from its minimalism. Scenes, dialogue and descriptions are – in sharp contrast to the florid nature of much Italian fiction – brief, almost terse. It would have been easy to fall into melodrama and produce a happy resolution, but Giordano remains as icy as his characters, offering only misunderstandings and missed opportunities until the bitter end.

The New York Times: The story — the explanation, really — of how two people come to find solitude more comforting than companionship is the subtle work of Giordano’s haunting novel, a finely tuned machine powered by the perverse mechanics of need.

robonbooks: ..The Solitude of Prime Numbers is a phenomenal read and it’s one which is highly recommended. It’s not often that a novel can come along and leave an indelible mark on a reader’s soul, but this novel seems to do just that. From a seasoned and aged novelist this would be a sensational achievement, but to come from a debut novelist still in the prime of his youth, is nothing short of extraordinary.

Ambivalent or reviews not in favor:

Farm Lane Books: The Solitude of Prime Numbers was a real page-turner and I read it in a single sitting. The plot was fast paced and well structured, but I was surprised that this book was so highly acclaimed – it was an enjoyable read, but it lacked the depth I expected from a multiple award winner. The writing was simple, but precise and there were many sections where his talent shone through, but at the end of the book I was left with a “is this it?” feeling… Overall, I thought it was a reasonably enjoyable light thriller, but it is nothing special.

Iris on Books: The Solitude of Prime Numbers by Paolo Giordano is one of those books that left me with nothing to say. Not only, I might add, in a positive sense. I’m simply unsure what to say except that this book left me with mixed feelings. Maybe I’ve read so many good things about this book, combined with it winning the Premio Strega award, making Giordano the youngest winner ever of this Italian literary award, that this could only disappoint.

The Independent: Not a bad result for a first attempt at fiction by a promising hope for the future of Italian literature.

The Complete Review: There’s considerable talent at work here, and The Solitude of Prime Numbers is a reasonably compelling read, but it’s ultimately not truly satisfying.

The Washington Post: There’s no arguing with this depressive emotional position, besides growing up. We all have to die, and that means in the end that the depressives are right. I’m just wondering about the thousands upon thousands of Europeans who (presumably) subscribe to this position, and have turned, by their adulation, this whimpering cub into a literary lion.

Well, I don’t know what to make of this.  I like rob of robonbook’s reading.  And afterall, Farm Lane and I both adore Saramago, hardly scientific I know.  Then there is Iris on Books, a favorite blogger of mine.  So I divine that I’m not going to think much of this book 😉  I will post a review when I’m done.  Seriously though, some of the topics that I have to come up with to try and write 14 posts for the 2010 Blog Improvement Project’s Bingo Posts assignment 🙂

So can I really start a book thinking that I will not like it?  Have you written a collation post before?